Amsterdam is a romantic city, full of canals and pretty bridges isn’t it? So you would expect to see many, many more of those love-lock bridges around town. But no, we have only two, de Magere Brug (Skinny Bridge) and de Staalmeestersbrug. The love-locks on the Magere Brug have recently been drastically pruned by the Amsterdam Council  so only a few remain, clinging a little forlornly onto the bridge’s warning light. 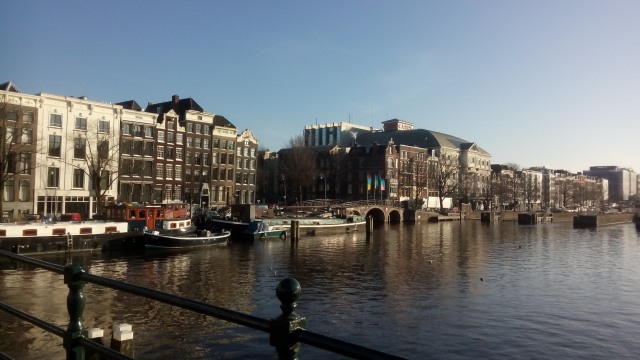 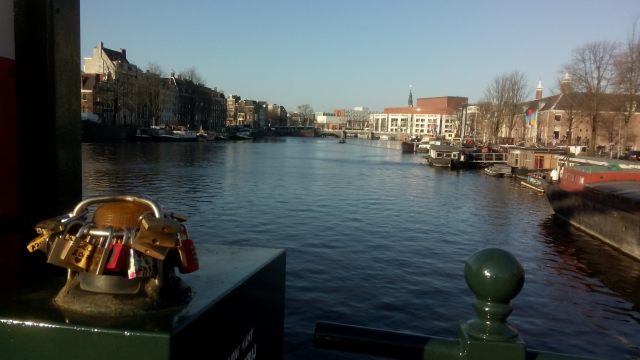 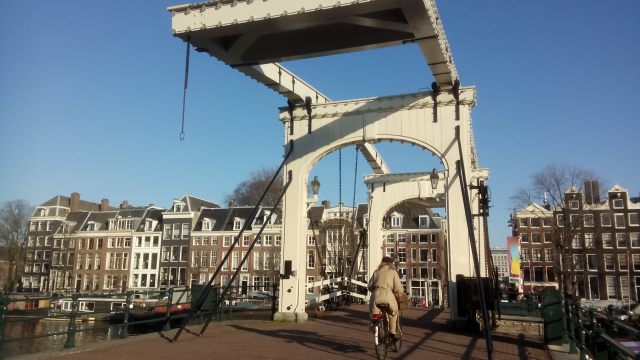 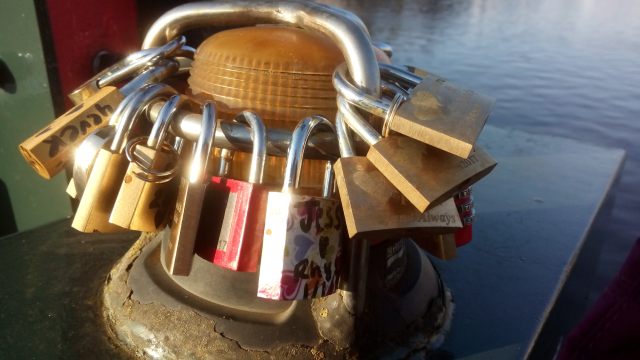 UPDATE – Jan 2019! The last time I went to the bridge there were no love-locks. I think local residents/council have really clamped down on it. Many Amsterdammers feel that their city is overrun with tourists and the distaste for lovelocks is an expression of that resentment.

The Staalmeestersbrug with the tower of the Zuiderkerk in the background, puts on a better show. As I took my photos I met a lovely couple who were searching for the padlock they had placed there to seal their love, three years ago. The man even scaled the bridge’s chains, rifling through all the other padlocks in a desperate search for it. Sadly, it was gone, but the couple are still together, which strikes me as the most important thing! I wonder if Amsterdam council workers ever have any qualms while wielding their bolt-cutters destroying the pacts sealed by all those lovers? Knowing the pragmatic Dutch: probably not. 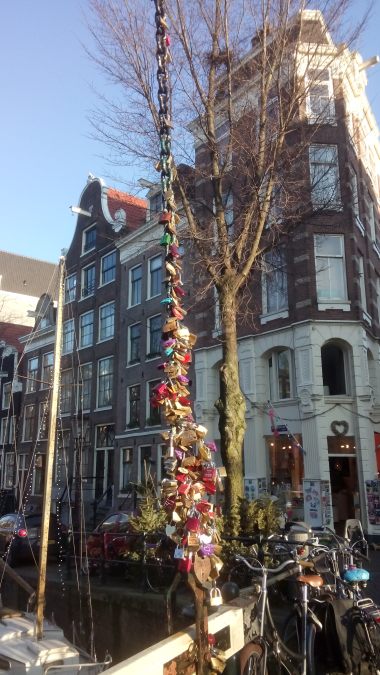 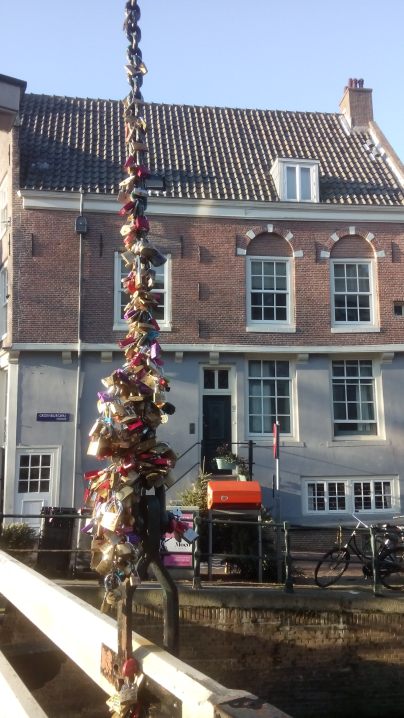 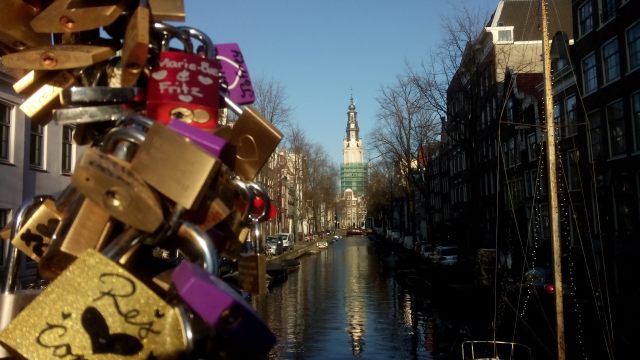 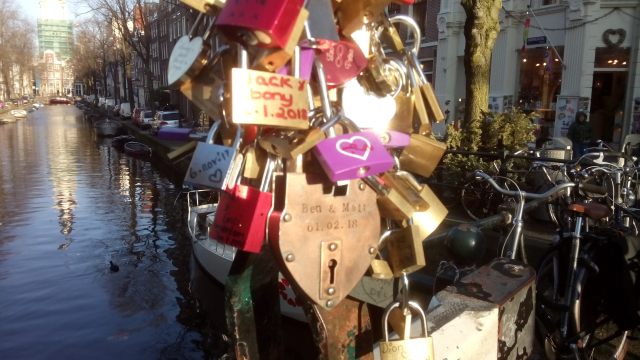 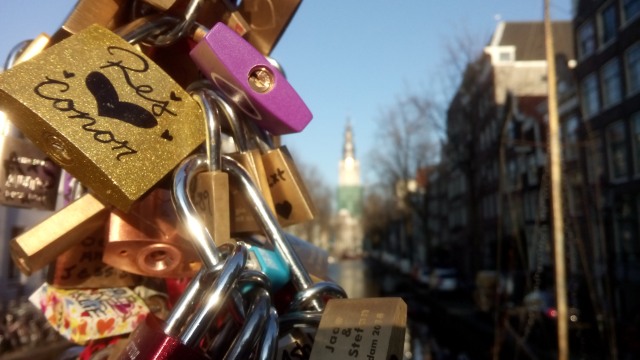 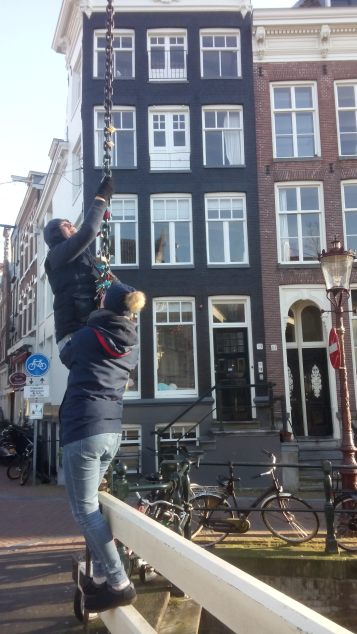 Where did it all begin?
According to Elisabeth Timmermans who writes a great blog called, ‘Love in the Time of Tinder’ (in Dutch) this tradition of lovers engraving a padlock with their names, chaining it to a bridge and then throwing the key in the water dates back to the eve of WW1. In Serbia, the stunningly beautiful, Nada fell in love with Relja, a Serbian officer. Relja was conscripted to fight in the war against Greece but the couple sealed their love and swore eternal fidelity to each other by getting engaged before Relja went off to war. Months and months passed and after a series of love letters that remained unanswered, it finally dawned on Nada that Relja would never come back home. Not because he had been killed, but because his heart no longer craved her or his native Serbia.

In Greece Relja had fallen madly in love with a woman from Corfu and subsequently broke off his engagement with Nada. Her heart broke. A lost soul, she wandered through the Serbian town of Vrnjačka Baja and jumped off the famous footbridge in Serbia, the ‘Most Ljubavi’ (literally translated as Love Bridge). She died from her injuries. Since then the ‘Most Ljubavi’ has been covered in love locks. According to legend, all soldiers return faithfully to their fiancée after their love is sealed by means of a love-lock to ‘Most Ljubavi.’ This ritual practice has now spread over many cities and even though Amsterdam Council does its best, it can’t totally control the lovers that are drawn to this romantic city with its shimmering canals and picturesque bridges.

Love Undeterred
The couple whom I met on the Staalmeestersbrug were undeterred however and set off to buy a new padlock and attach it to the bridge again, this time hopefully for eternity, or at least until the next bolt-cutting killjoy comes along. 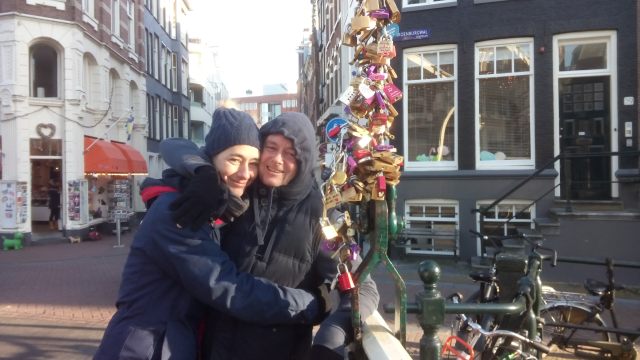 Angela writes using pseudonym, Susan Carey. She has dual nationality, GB/NL and lives in Amsterdam. Susan has had short fiction published on multiple platforms and was a runner-up in the 2018 and 2017 Casket of Fictional Delights Flash Competitions. Every year she is crazy enough to take part in Nanowrimo, and has done so successfully since 2009. Her writing has also been published and performed by amongst others; Mslexia, Liars’ League, Reflex Fiction, the Casket and of course the wonderful Writers Abroad. She has a love hate relationship with her adopted hometown and often dreams of living in a thatched cottage, far from the madding crowd.
View all posts by susancarey →
This entry was posted in travel and tagged Amsterdam, Love Bridge, Love-lock Bridges, Magere Brug, Most Ljubavi, Romantic weekend, Staalmeestersbrug, travel. Bookmark the permalink.

7 Responses to Love-lock Bridges in Amsterdam