Derelict, a 101-word story set in a dystopian future where books are forbidden.

A Gentleman’s Wager, my re-imagining of Beauty and The Beast, is now online and available as a podcast via the link below. This twisted tale was inspired by Angela Carter’s collection of subversive fairytales, The Bloody Chamber.

What more could Bella lose? Her father already gambled away their home and possessions. When they both arrive at an insalubrious inn, events spiral into unimaginable darkness. Read, A Gentleman’s Wager and find out what happened!

‘Healer,’ already published online at Reflex Fiction is now featured in ‘The Real Jazz Baby’ anthology by Reflex Press. Available via the link as an e-book or paperback.

The Real Jazz Baby features 162 flash fictions from over 120 of the best flash fiction writers in the world. These short short stories, each no longer than 360 words, were long-listed for the four rounds of the Reflex flash fiction competition held in 2018. Within these pages traditional narrative shares space with the boldly experimental. Humour sits alongside tragedy. The Real Jazz Baby is the perfect introduction to readers new to flash fiction, and essential reading for those already familiar with what the form can offer. 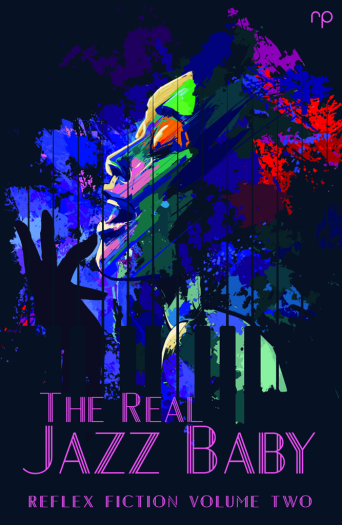 In June every year as part of National Flash Fiction Day celebrations, a flood of curated flash fictions is posted over a period of 24 hours. My 500-word story is about a woman in a toxic relationship; Seven Ways to Wear a Pashmina. The borrowed form was inspired by the highly regarded Fast Flash Workshop I followed with FF expert, Kathy Fish earlier this year.

The year 2019 has started well; I was long-listed in the prestigious Mslexia Magazine’s flash fiction competition! Mslexia attracts the best writing from around the globe. The competition was judged by flash fiction innovater, Meg Pokrass.

A seasonal 300-word story which captures the melancholy of the season, ‘Christmas Still in the Basement.’ Frosty the Snowman is just a crumpled heap in Tammy’s basement. Curious to know why? Find out here on the Casket of Fictional Delights.

‘Swanning Around’ on Flash Flood Journal

In October 2017, I was placed amongst the 10 prize winners of The Casket of Fictional Delights Flash Fiction competition. Bestselling author, Kit de Waal was the judge. Listen to actor, Vivien Taylor perform my story, To See a Star, set in wartime Amsterdam. Enjoy  all the stories or fast forward to 6m 28 sec where my story begins on the podcast here.

A Wolf in Sheep’s Clothing about an old lady who is not as gullible as she appears, was also placed in the top thirty stories and published by Stringybark Publishing in their anthology, A Gentleman and a Scholar.

Earlier in 2017, A Bit of Sparkle, set in a Bangladeshi sweatshop and a Bristolian working -class home, was accepted for 100 Voices volume III anthology. Available from Amazon via the link.

In February 2016 and July 2017, I won the Little Ms, Flash Fiction Competition and my pieces were published in the Mslexia newsletter. Mslexia is an important literary magazine where many women writers have launched their careers, so this has given a real boost to my writing confidence.

2015, and my flash fiction story based on the true account of the SAS recruits who died of heatstroke on the eponymous, ‘Pen y Fan,’ was published in, Landmarks. Landmarks is an anthology of the best flash fiction, published to celebrate National Flash Fiction day 2015. Rubbing shoulders with the great and the good of FF here!

In 2014, ‘A Gibbous Moon’ was selected for the Raging Aardvark anthology! Two teenage girls perform an ancient Witches’ ceremony in their bedroom, after that strange and terrifying things happen. For sale on Amazon here.

In 2012, ‘Meltdown,’ was performed at Liars League live storytelling event in Leeds  and I was shortlisted in Fish Publishing Flash Fiction competition. Over 1,000 entrants took part! I also had four new stories published online, links below. All flash fiction pieces are under 500 words.

Church custodian, Mary Samuels is livid when a bronze sculpture in her care is nicked and possibly melted down. As the story unfolds we discover that Mary has a dark and unexpected past…

The gentlemen are assembled, the brandy poured. And the club’s newest member has a startling tale to tell.

Wolf at the Door, published in Writers Abroad Magazine. A new take on an old fairy tale.

Flash fiction piece, Alchemy, set in a London art college in Thatcher’s Britain has been published on Story Shack. It is accompanied by a beautiful illustration of Myatt’s Fields by Sherri Oliver.

Rafael’s Madonnna and conversations with the head of Fine and Decorative Arts at the Rijksmuseum, Gregor Weber inspired, A Veiled Lady published on Story Shack.

Article about home-swapping in Weekly Telegraph

Non-fiction, How to Swear like a Dutchie, in Writers Abroad Magazine.

Women behind the Wire – memories of life in a Japanese internment camp in Summer 2011 issue of Herstoria. Read the article online here.

Some articles/stories are published using my real name, Angela Williams.