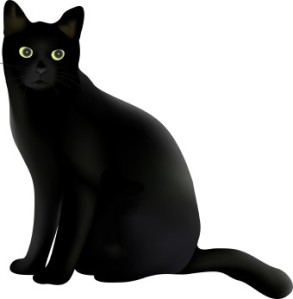 As I stepped in my car to drive to Haarlem to teach an English class on Friday 13th, I felt a quiver of trepidation. I switched on my trusty Tom Tom (sat-nav is known by brand name here) and crossed my fingers that all would be well. I would take the route avoiding the speed cameras that had caught me out twice for ‘speeding.’Haarlem council sees its motorists as a cash cow, setting up cameras just past the changeover speed limit zone. Tom Tom also indicated a 70km limit instead of the actual 50km limit on that stretch of road, which didn’t help much.

River Saarne in Haarlem (US Harlem named after this one!)

Anyway, I arrived safely and fingers crossed, speeding-fine-free. Perhaps the subject of superstition might be an interesting discussion for the last half hour of the English lesson, I thought. Will I never learn? Whenever I have asked a Dutch person if they’re superstitious I have always been met with a resolute, no. They leave that nonsense up to irrational folk. ‘You don’t think we built this country with our bare hands and reclaimed it from the sea by believing in stuff about black cats, not walking under ladders and all those old wives’ tales, do you?’ They don’t actually say that of course, but I can see that’s what they’re thinking.

Still, I persevered and the conversation veered off to the subject of taking your own fate in your hands and whether destiny existed. I was amazed at the depth of the conversation I was able to have with someone who is at B1 (lower intermediate) level of proficiency. As it was the final session of the course I received a parting gift, in thanks for the lessons. This was an unusual but thoughtfully compiled present, a Joseph Joseph cutting board, decorated with a Union Jack in a fruit pattern, pineapple cake and, oh dear, a knife! 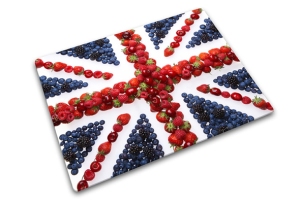 I thanked him and his secretary and hoped that receiving a knife on Friday 13,th without the antidote copper coin, wasn’t tempting fate. Not too perturbed though, I drove home safely and unusually in our street, immediately found a place to park. Even though the parking per month is 16 euros we are never assured of a space. Then I opened a text message from our guests who wanted to leave their tourist accommodation at 10.30 am the following morning and what time would I ‘pass on’? I wanted to text back, not intending to pass on anytime soon, actually! But that would be silly and the French family had no idea of the difference between pass on and pass by and no longer in teaching mode, it wasn’t my job to tell them.

To top it all my new neighbour decided Friday 13th was an auspicious day to start ripping out the mirrored tiles from his bathroom. The resounding crash of mirror shards falling onto the concrete floor spelt the end of a sunny afternoon on the balcony and possibly seventy years of bad luck, for him, at least. My apartment block was built in the thirties for dockworkers’ families who lived cheek by jowl. Everyone knew everyone else, swept their pavements weekly and if anyone moved in or out, all around would come and help. Now that yuppies are moving in, there’s a trend of totally gutting apartments and quiet time on the balcony, reading my Kindle is often marred by this. At least I’ve got the allotment to flee too.

So I survived Friday 13th relatively unscathed. How about you and your culture? Do you happily walk under ladders or do you hold your collar till a dog crosses your path after seeing a funeral cortege?

Angela writes using pseudonym, Susan Carey. She has dual nationality, GB/NL and lives in Nijmegen. Susan has had short fiction published on multiple platforms and was a runner-up in the 2018 and 2017 Casket of Fictional Delights Flash Competitions. Her writing has also been published and performed by amongst others: Mslexia, Liars’ League, Reflex Fiction, the Casket and of course the wonderful Writers Abroad. In 2020 she published her short story collection, Healer. Tweets at @su_carey
View all posts by susancarey →
This entry was posted in Uncategorized and tagged cash cow, old wives tales, pineapple cake, walking under ladders. Bookmark the permalink.