HOORAY, IT’S MAYDAY! sssshh, I mean hooray, it’s Mayday. Most Queen’s Day revellers are nurturing a headache, no doubt. ‘Koninginnedag’ (don’t try and pronounce if you are of a nervous disposition) is a national holiday and an excuse for a giant street party all over the Netherlands. Most partygoers choose to descend on Amsterdam, however. By mid-afternoon the ring of canals turns into a claustrophobic crush of people. Especially on the humpbacked bridges that act very effectively as bottlenecks. Go along if you enjoy being squashed by lofty, orange-clad drunkards. Mind you a lot of punters normally have to pay for that kind of thing in Amsterdam. On Queen’s Day it’s free. Luvverly! Not. 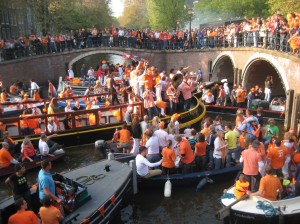 Join the crush on the canals…

So what’s it all about this Queen’s Day thing, then?

Well, on 30th April the Dutch celebrate Queen Juliana’s birthday. Queen Beatrix is the current queen of the Netherlands and Juliana was her mother. It’s a day where everyone can be unashamedly patriotic, wear orange and sell all their old tat, I mean unwanted stuff on the streets in one giant car boot sale. It’s also an oppurtunity for budding singers/musicians to showcase their talents. For one day of the year everyone can be an entrepreneur or entertainer, selling homemade food or performing for the passers-by.

When I first moved here I used to love setting up a stall and even printed T-shirts and made jewellery especially. Now, owing to the vast invasion from out-of-town visitors, it’s much more regulated in the centre and you can’t get anywhere near by car or bike. For that reason I tend to avoid; the Jordaan, Prinsengracht, Herengracht, Keizersgracht and Singel. I get rather townist on 30th April. Stay in your hometown and celebrate there! Don’t clog up Amsterdam’s ring of canals. Just heard on the radio, ‘only’ 800,000 visitors this year, 100,000 fewer than last year. Result!

Head to the Apollobuurt for old- fashioned ‘gezelligheid’ and bargains! 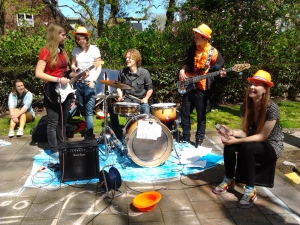 What did I do on this wonderfully sunny day? In the morning I headed to the Apollobuurt, where Amsterdam’s well-heeled live and enjoyed street food and budding musicians while snuffling out some bargains, including a Barbour jacket for hubby for just 15 euros! Afterwards we escaped to the allotment to languish amongst the birdsong. Savouring my bargains I enjoyed a cold glass of Sauvignon Blanc and the view of my shed in the spring sunshine. Jaded? No, it’s called post-modern ironic, (whatever that means). Anyway, I survived. Now only 364 days till the next one.

What have they done to the Queen?

Just 50 cents for this adorable bag. 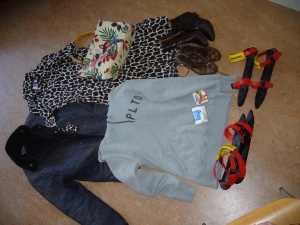 Angela writes using pseudonym, Susan Carey. She has dual nationality, GB/NL and lives in Nijmegen. Susan has had short fiction published on multiple platforms and was a runner-up in the 2018 and 2017 Casket of Fictional Delights Flash Competitions. Her writing has also been published and performed by amongst others: Mslexia, Liars’ League, Reflex Fiction, the Casket and of course the wonderful Writers Abroad. In 2020 she published her short story collection, Healer. Tweets at @su_carey
View all posts by susancarey →
This entry was posted in Uncategorized and tagged Amsterdam, Apollobuurt, Barbour, Bargains, Orange mania, Queen's Day, ring of canals. Bookmark the permalink.