Stichting Aap is a Dutch charity set up to rescue primates and exotic animals from cruel or unsuitable homes. It houses around 300 animals in Almere and also attempts to re-home primates and exotics in high quality zoos and sanctuaries around the world. It has a sister organisation in Spain, Primadomus, the new rescue centre near the city of Villena.

Recently, I went on an open-day tour organised especially for SA donators. We were warned beforehand that we weren’t to smile at or make eye contact with the primates. This was to prevent Bokito-type scenarios. Bokito is the alpha gorilla from Rotterdam zoo who had a female admirer who smiled at him on regular visits. He interpreted her teeth baring as a sign of aggression and one day leapt over the water separating him from the public and attacked the woman. He dragged her around by the hair and inflicted multiple fractures and bites. Both parties lived to tell the tale. The woman’s affection for Bokito is apparently, undiminished.

The ape sanctary in Almere is set up so that the primates have as little contact as possible with humans. When they arrive they spend several weeks in quarantine and then are slowly re-socialised with their own species. After that they are released into fields or enclosures where they are encouraged to follow their natural behaviour as much as possible.

Rescued from a laboratory, this rhesus ape was conditioned to accept drinking water as a reward.

During the introductory talk we were told that this wasn’t going to be a zoo-like experience. In between the enclosures there were wooden boardwalks and as we shuffled along huddled under umbrellas, sheltering from the torrential downpour, it definitely felt like we were the captives being gawped at! 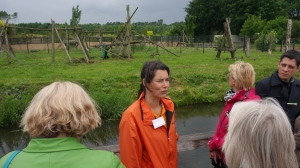 Fifi, the chimpanzee, was born in the wild in West Africa. She was caught for the exotic animal trade, bought by an eccentric millionaire and ended up in the dilapidated attic of a castle gatehouse near Paris. There she spent 30 lonely years and was infected with two STDs. She hadn’t lost her faith in humanity though and now lives a happy retirement in Almere with two elderly male chimps.

Achille, was a major attraction in a down-at-heel French circus. He was housed in a small cage, where he was put as a juvenile chimp, and of course had dramatically outgrown in the many years he’d been touring with the circus. His cage door had to be cut open in order for him to come out. Understandably, when his door was opened he became totally hysterical. Achille had to be sedated and slowly learn natural chimp behaviour. Now he lives a contented life in Primadomus (Spanish branch of Stiching Aap). 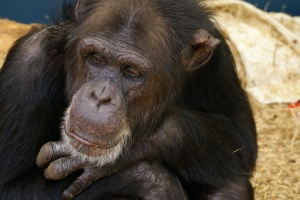 Tonkin, the racoon, was kept as a pet on an Amsterdam balcony and one day made a bid for freedom. He found a sanctuary in nearby city gardens and helped himself to food from the bird tables. When he dived into a canal in order to pinch some ducks’ food he quickly discovered that swimming was great but canal walls were very slippery and steep. He was fortunately rescued by the dierenambulance and later re-homed at Stichting Aap. 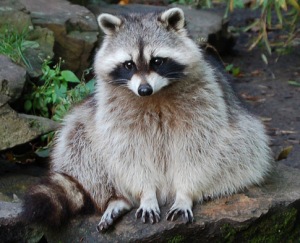 Although Stichting Aap is not a zoo it is possible to visit the centre in Almere. The islands with the boardwalks are open daily to the general public between 9.30am and 4pm. Almere is about half an hour’s drive away from Amsterdam. If you don’t have time to visit you can always go to the website and donate some money! NL residents can also donate air miles. You’ll make some animals very happy!

Angela writes using pseudonym, Susan Carey. She has dual nationality, GB/NL and lives in Nijmegen. Susan has had short fiction published on multiple platforms and was a runner-up in the 2018 and 2017 Casket of Fictional Delights Flash Competitions. Her writing has also been published and performed by amongst others: Mslexia, Liars’ League, Reflex Fiction, the Casket and of course the wonderful Writers Abroad. In 2020 she published her short story collection, Healer. Tweets at @su_carey
View all posts by susancarey →
This entry was posted in Uncategorized and tagged Almere, Bokito, dierenambulance, donate air miles, primadomus, primate sanctuary, rhesus ape, rotterdam zoo, Stichting Aap. Bookmark the permalink.