Sweet Cigarettes and Breakfast under the Balloons 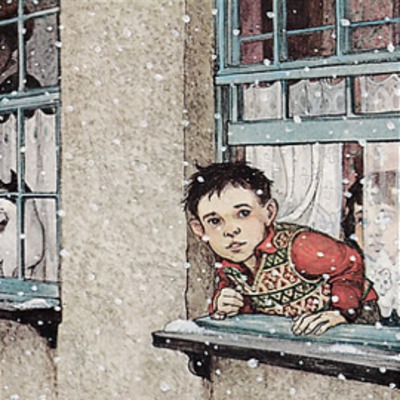 A Child’s Christmas in Wales is a prose work by the Welsh writer Dylan Thomas. Originally emerging from a piece written for radio, the poem was recorded by Thomas in 1952. The story is an anecdotal retelling of a Christmas from the view of a young child and is a romanticised version of Christmases past, portraying a nostalgic and simpler time. It is one of Thomas’ most popular works.

“Go on the Useless Presents.”
“Bags of moist and many-colored jelly babies
and a folded flag and a false nose and a tram-
conductor’s cap and a machine that punched tickets
and rang a bell; never a catapult; once, by mistake
that no one could explain, a little hatchet;
and a celluloid duck that made, when you pressed it,
a most unducklike sound, a mewing moo that an
ambitious cat might make who wished to be a cow;
and a painting book in which I could make the grass,
the trees, the sea and the animals any colour
I pleased, and still the dazzling sky-blue sheep
are grazing in the red field under the
rainbow-billed and pea-green birds.
Hardboileds, toffee, fudge and allsorts, crunches,
cracknels, humbugs, glaciers, marzipan, and
butterwelsh for the Welsh. And troops of
bright tin soldiers who, if they could not fight,
could always run. And Snakes-and-Families
and Happy Ladders. And Easy Hobbi-Games
for Little Engineers, complete with instructions.
Oh, easy for Leonardo! And a whistle to make
the dogs bark to wake up the old man next door
to make him beat on the wall with his stick
to shake our picture off the wall.
And a packet of cigarettes: you put one
in your mouth and you stood at the corner
of the street and you waited for hours, in vain,
for an old lady to scold you for smoking
a cigarette, and then with a smirk you ate it.
And then it was breakfast under the balloons.”

And for those of you who have always lived in a politically correct era, here’s a picture of a 1950s sweet cigarette packet…

Angela writes using pseudonym, Susan Carey. She has dual nationality, GB/NL and lives in Amsterdam. Susan has had short fiction published on multiple platforms and was a runner-up in the 2018 and 2017 Casket of Fictional Delights Flash Competitions. Her writing has also been published and performed by amongst others: Mslexia, Liars’ League, Reflex Fiction, the Casket and of course the wonderful Writers Abroad. She has a love hate relationship with her adopted hometown and often dreams of living in a thatched cottage, far from the madding crowd. In 2020 she published her short story collection, Healer. Tweets at @su_carey
View all posts by susancarey →
This entry was posted in Uncategorized and tagged A Child's Christmas in Wales, Christmases past, Dylan Thomas, sweet cigarettes, Welsh poet. Bookmark the permalink.

1 Response to Sweet Cigarettes and Breakfast under the Balloons