Last time it was ribbons, now it’s buttons. Am I turning into a haberdashery connoisseur? Probably not, but I do like a nice button from time to time. I remember having a conversation about buttons with my much-loved mentor, Christine Risley, when I was studying textiles at  Goldsmiths. One year, I sent her a Christmas card which was made of a paper plate and decorated with lace, a huge button and glitter. Uhu glue, glitter and cheap lace from Woolies were mainstays during my surrealist period. Anyway, the card wriggled through her letterbox, dispersing a trail of glitter and triggering a whole train of thoughts about the significance of the humble button.

Have you ever seen that film, with Sally Field, called Sybil? I asked Christine, when we met for tea and cake in Blackheath Village. Sybil had dissociative identity disorder and was horribly abused by her mother with a button hook. Since then I have been unable to look at a button hook without crossing my legs. Christine’s memories of buttons were related to WWII when she was growing up as the eldest daughter in a lower-middle class family. The thrifty wartime philosophy meant buttons were recycled from garment to garment. Christine’s love of the decorative, which inspired her to teach the craft of machine embroidery, was born during those ‘Make do and Mend’ years.

The phobic fear of buttons is called koumphounophobia. Steve Jobs, co-founder of Apple, was a sufferer. If it hadn’t been for his aversion to buttons perhaps the touch-screen phone and tablet might never have been invented! An invention I’m sure they couldn’t even imagine over 3,000 years ago, during the Bronze Age, when the first buttons made an appearance. While recognisably buttons, Bronze Age folk didn’t fasten anything with them, but wore them purely for decoration. By around 1200, the functional button and buttonhole arrived in Europe, brought back home by the returning Crusaders. It wasn’t their invention however, they ‘borrowed’ the idea from the Turks and Mongols. From then on, the button and buttonhole became an intrinsic part of clothing design. More info about the surprising history of buttons here.

Anyhow, as usual, I digress! This week I bagged a bargain vintage 1950s tea dress at this shop, Marbles Vintage, along the Haarlemmerdijk. I adored the pretty print and the fact it was clearly home-made. I wondered about the woman who made it as there are no signs of wear and tear on the dress. The buttons on it were obviously recycled from another garment and horribly ugly so this was a perfect excuse to visit to one of my favourite shops in Amsterdam, De Knopen Winkel at number 64 along the Herengracht. Below a few photos of the shop and finished result. 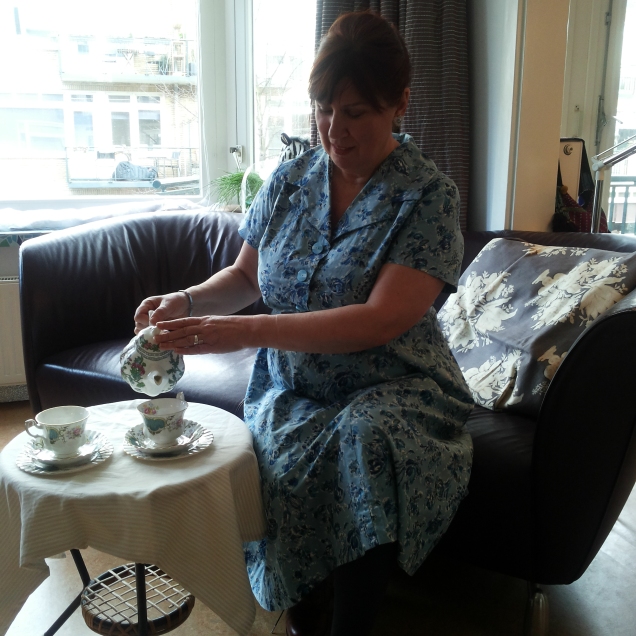 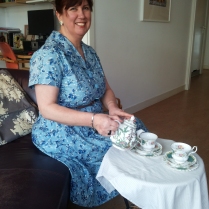 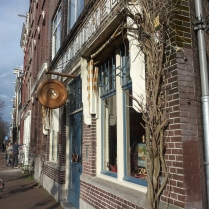 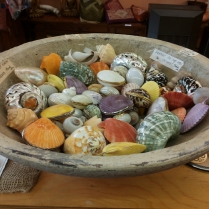 Angela writes using pseudonym, Susan Carey. She has dual nationality, GB/NL and lives in Nijmegen. Susan has had short fiction published on multiple platforms and was a runner-up in the 2018 and 2017 Casket of Fictional Delights Flash Competitions. Her writing has also been published and performed by amongst others: Mslexia, Liars’ League, Reflex Fiction, the Casket and of course the wonderful Writers Abroad. In 2020 she published her short story collection, Healer. Tweets at @su_carey
View all posts by susancarey →
This entry was posted in Uncategorized and tagged Amsterdam, Buttons, Christine Risley, de Knopen Winkel, dissociative identity disorder, Goldsmiths, koumphounophobia, Make do and Mend, Marbles Vintage, Sally Field. Bookmark the permalink.