Geef om de Jan Eef is a unique organisation which unites residents and local shopkeepers in a bid to improve the safety and prosperity of the Jan Evertsenstraat. The Jan Evertsenstraat crosses Amsterdam neighbourhoods, West and Nieuw West. In the early 2000s, parts of the street were plagued by criminality and in 2010, Fred Hund was murdered in his jewellery shop along the Jan Evertsenstraat. After this terrible event, in 2011 the organisation Geef om de Jan Eef (care about the Jan Eef) came into being and has since then organised many social events which improve the liveability of the neighbourhood.

You can take the girl out of Ross-on-Wye,….
With this community spirit in mind I went to the Mercator Souk Market on Sat 28 Feb. The market is an eclectic mix of artisan foods, second hand goods and quirky upcycled items. The first thing I saw for sale was cider and perry from my old stomping ground, Ross-on-Wye! Ross-on-Wye is the town where I went to school. I also spent my first ten- bob note on an outfit for Sindy at Tilley’s toy shop in Ross.

Cider is becoming more and more popular in the Netherlands but it sometimes amazes me that I can get products from Herefordshire so close by. Café Zurich on het Mercatorplein also occasionally serves Herefordshire beef. It’s all part of the gentrification process I guess, but you won’t catch me complaining. I loves a bit of cideeer, I do! Visit Het Ciderhuis website for more info on where to order/buy English and Welsh cider.

Quirky lamps
I also loved the stall selling upcycled lamps from Kesbeke jars. I blogged about one of the few remaining factories in Amsterdam, Kesbeke pickles here. Pickle n Glow put model animals inside the used pickle jars and transform them into atmospheric lights. I particularly like Shere Khan! These would make great gifts for kids from 8 to 80.

I bought Mandarin and Honey chutney at Kitty’s Jam. Kitty also gives chutney making workshops in Utrecht. Chutneys are also becoming more popular here too. I guess it’s all the English cooks on telly that must have convinced the Dutch that English food and drink aren’t as bad as they thought, after all! 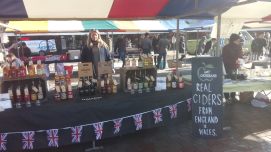 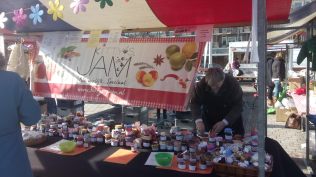 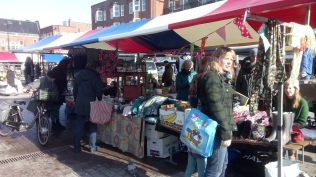 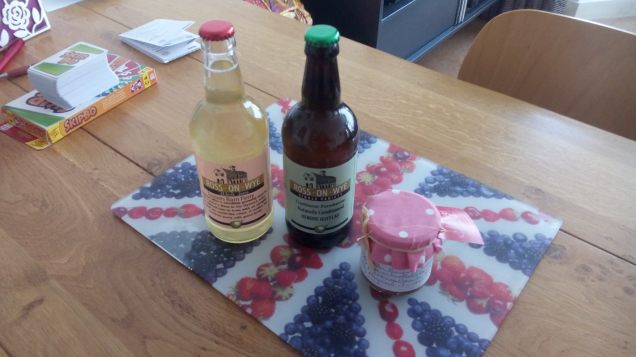 Angela writes using pseudonym, Susan Carey. She has dual nationality, GB/NL and lives in Nijmegen. Susan has had short fiction published on multiple platforms and was a runner-up in the 2018 and 2017 Casket of Fictional Delights Flash Competitions. Her writing has also been published and performed by amongst others: Mslexia, Liars’ League, Reflex Fiction, the Casket and of course the wonderful Writers Abroad. In 2020 she published her short story collection, Healer. Tweets at @su_carey
View all posts by susancarey →
This entry was posted in Uncategorized and tagged Amsterdam market, Het Ciderhuis, Ik geef om de jan eef, Jan Evertsenstraat, Kitty's Jam, Mercatormarkt, Mercatorplein, Pickle n Glow. Bookmark the permalink.

4 Responses to A Taste of Home at the #MercatorMarkt #geefomdejaneef