Horses and Hermès. A marriage made in Amsterdam

Exclusive French fashion label, Hermès don’t advertise very much. Well, it’s all rather vulgar isn’t it, dahlings? Hermès create aspirational fashion and equestrian items that most people can only dream of owning. So when I heard that their travelling artisan studio was coming to the Hollandsche Manege in Amsterdam, well how could a girl resist?

History
Hermes is a French manufacturer established in 1837, today specializing in leather, lifestyle accessories, perfumery and luxury goods. Its logo, since the 1950s, is of a Duc carriage with horse. Thierry Hermès (1801–1878) was born in Germany to a French father and a German mother. The family moved to France in 1828.In 1837, Thierry Hermès first established Hermès as a harness workshop in the Grands Boulevards quarter of Paris, dedicated to serving European noblemen. He created high-quality wrought harnesses and bridles for the carriage trade.

Gee Gees
Hermès’ association with the equestrian world is still strong today; their saddles are much sought-after, so the Hollandsche manege as a venue was a logical and very stylish one.  Visitors get a chance to speak to the artisans and designers that create the luxury products. Let’s face it, it’s the nearest most of us will get to a Hermès bag, scarf or diamond bracelet!

Scarves
The silk scarves were my favourite pieces and because of my background in textiles, it was especially interesting to watch the silk screen demonstration. I know how difficult this process is and the degree of accuracy and skill it requires. No wonder those beauties cost a fortune!  It’s all done by hand on a small scale at their headquarters in Lyon. One 36 inch scarf requires 250 silk cocoons to make. Hermès scarves have been worn by the world’s most elegant (and rich) women; Grace Kelly, Jackie Kennedy and Queen Elizabeth II. My favourite contemporary scarf (unfortunately it didn’t find its way into my handbag) was the winged Pegasus zebra designed by Central St Martin’s alumna, Alice Shirley.

So hurry dahlings. You only have until Sunday evening to experience a whiff of luxury in usually very down to earth Amsterdam!
1 thru 10 april 2016
11.00 uur tot 19.00 uur 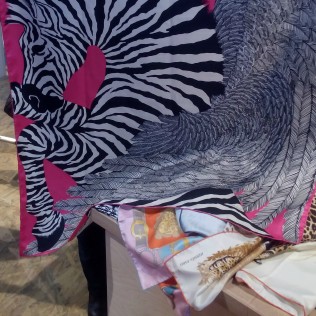 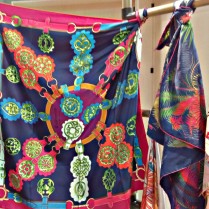 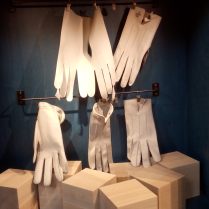 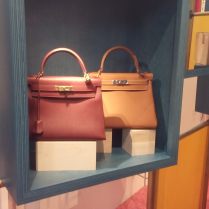 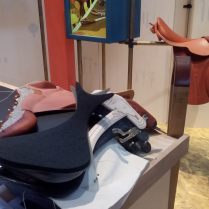 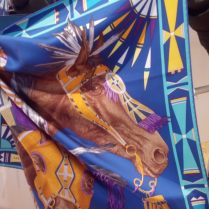 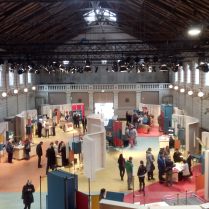 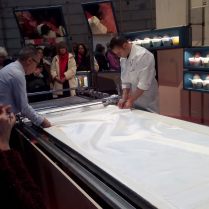 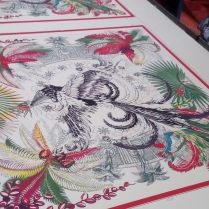 Angela writes using pseudonym, Susan Carey. She has dual nationality, GB/NL and lives in Amsterdam. Susan has had short fiction published on multiple platforms and was a runner-up in the 2018 and 2017 Casket of Fictional Delights Flash Competitions. Every year she is crazy enough to take part in Nanowrimo, and has done so successfully since 2009. Her writing has also been published and performed by amongst others; Mslexia, Liars’ League, Reflex Fiction, the Casket and of course the wonderful Writers Abroad. She has a love hate relationship with her adopted hometown and often dreams of living in a thatched cottage, far from the madding crowd.
View all posts by susancarey →
This entry was posted in Uncategorized and tagged alice shirley, Amsterdam, equestrian goods, Hermès, hollandsche manege, Luxury goods, silk scarves. Bookmark the permalink.

2 Responses to Horses and Hermès. A marriage made in Amsterdam