Not fancying a bumper-to-bumper drive towards Zandvoort, husband and I spent a couple of hours in the very pretty Friesian town of Lemmer a few weekends ago. It was a baking hot Sunday afternoon and after recovering from our non-air-conditioned drive we enjoyed soaking up the atmosphere in this picture perfect harbour town. It’s only an hour’s drive from Amsterdam but I felt I was entering a totally different world, even another country. I don’t know Friesland that well but it’s a lot less cramped than the Randstad and the description, big sky country, seems very apt.

The rather inward-looking, parochial atmosphere of the inner town of Lemmer is at odds with the wide horizons offered over the Ijsselmeer. Mainly German tourists visit in the summer months which results in what I experienced as a rather curt tone towards foreign accents of any description. I’ve lived in NL long enough to be used to the Dutch brusqueness but this seemed even stronger than that. Possibly there is some underlying resentment from the older generation towards the tourists that now supply the town with its livelihood. Understandable, perhaps but the families that lived from fishing must have largely died out by now. 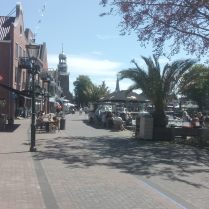 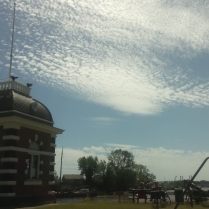 Lemmer is definitely worth a day trip and if you enjoy water sports and want to visit the Friesian Lakes this is a good place to base yourself. You won’t go short of restaurants and all the major supermarkets have stores there if you prefer to self-cater. They even have a British pub if that is your thing! You can also visit the nearby  Woudagemaal which is the pumping station that protects Lemmer from the substantial flood risks which accompany its unique location. Woudagemaal is a Unesco World Heritage site.

The town of Lemmer developed in a strategically vulnerable place on the Zuiderzee. During the centuries Lemmer has been besieged by aggressors many times. In the periods of peace between the military fracases, Lemmer grew into a lively harbour. The village and waterfront changed unrecognisably in 1887 when a new lock was built. ‘The tide is going to turn and it waits for neither Princes nor gentlemen;’ is one of the six proverbs painted onto the neo-classical lock-keepers’ houses.

Alongside seafaring and its related industries, the fishing industry defined Lemmer’s character and contributed to its income. But when the Afsluitdijk was completed in 1932, the salt water Zuiderzee changed into the fresh water Ijsselmeer. An even bigger change was caused by the creation of the Noordoostpolder which began in 1936. This meant that 48,000 hectares was reclaimed from the sea and that sounded the death knell for the local fishing industry and caused a rapid and irrevocable decline of the town’s former lifeblood. Nowadays, picturesque Lemmer with its many canal-side restaurants and bars, draws thousands of tourists each summer because of its unique positioning between the Ijsselmeer and the lure of myriad water-sports in the Friesian Lake area.

Angela writes using pseudonym, Susan Carey. She has dual nationality, GB/NL and lives in Nijmegen. Susan has had short fiction published on multiple platforms and was a runner-up in the 2018 and 2017 Casket of Fictional Delights Flash Competitions. Her writing has also been published and performed by amongst others: Mslexia, Liars’ League, Reflex Fiction, the Casket and of course the wonderful Writers Abroad. In 2020 she published her short story collection, Healer. Tweets at @su_carey
View all posts by susancarey →
This entry was posted in Uncategorized and tagged Day trip from Amsterdam, Friesian lakes, Friesland, Lemmer, Water sports Friese meren, Woudagemaal, Zuiderzee. Bookmark the permalink.