Posted on February 5, 2018 by susancarey 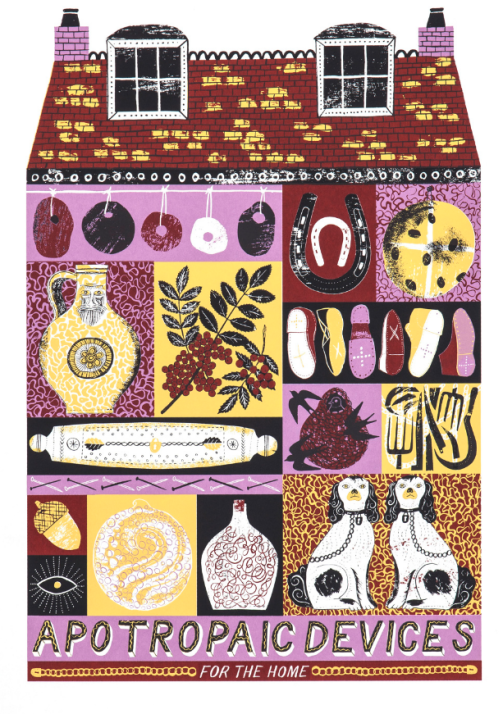 During a visit to Yorkshire Sculpture Park last year a print by illustrator, Alice Pattullo caught my eye. The picture was entitled, ‘Apotropaic Devices For the Home.’ I wasn’t sure what apotropaic meant, but the mirror-image china dogs triggered a childhood memory of dutiful visits with my mother to an elderly neighbour who had the same ornaments on her mantelpiece. We had few decorative objects in our farmhouse apart from photos of prize-winning sheep or horses displayed on a sideboard. Our main source of heat was a Rayburn (similar to an Aga) so we didn’t even have a mantelpiece to put china dogs on but still, I coveted them. After googling the word, I learned that apotropaic meant designed to avert evil, and discovered that china dogs were not merely ornamental, they also guarded against malign forces entering through the fireplace.

Superstitions
Even though we never had china dogs, Mum was quite superstitious; always buying J-cloths or scrubbing brushes to appease Gypsies who called at our house and so prevent them from casting spells upon us, always turning a horseshoe right side up so the good luck didn’t fall out and always closing umbrellas before entering the house. Naturally, I inherited some of these behaviours. As I sit here typing, I can see at least three protective talismans in my home. The Indalo man (dating from the Paleolithic period), which was a lovely gift from fellow WA member, Chris Nedahl; a nazar (stylized glass eye) which I bought in Istanbul; and a Mexican Day of the Dead skull which I bought in Leiden’s Museum of Ethnography.

Story Inspiration
Since leaving the depths of the countryside and living amongst the more rational Dutch I have become less superstitious but for our second WA anthology, Foreign Encounters, I wrote a story, ‘Blow Me a Kiss,’ about a curious object which fascinated me. Displayed in the tiny but entrancing Butcher Row House Museum, in Ledbury, Herefordshire, was a child’s shoe which had been found bricked up in the chimney of a local cottage. The museum attendant told me it was common practice to place shoes in portals of the home, i.e. chimneys or above windows or door lintels. The shoes were meant to ward off  malicious forces, luring evil entities to attack the shoe rather than the wearer. A child’s shoe might also promote fertility so my initial belief that a child had died in the house was unfounded. The Ledbury shoe had merely been outgrown and granted a second life protecting the home’s inhabitants.

An Archive of Hidden Shoes
The custom was so widespread in the UK that in the 1950s a Hidden Shoe Index was set up by former curator June Swann, at Northampton Museum. The index lists just under 3,000 shoes found in properties from the Shetland Islands to the Isles of Scilly, with the greatest number being from the south-east of England. The museum also holds 250 found shoes, the oldest dating to the 1540s, from St John’s College, Oxford (pictured above) The practice was taken to the New World by immigrants where it continued into the 1920s and 1930s. The current curator still receives two or three messages per month about found shoes from as far afield as the US, Canada and Australia. The museum index has recently been digitized and should you want to research further there is also a user-generated, online catalogue of hidden shoes with their locations on Historypin.

Are Writers More Superstitious?
So in an age where science and technology rules our lives what makes some of us still superstitious? Are writers and creative folk generally more superstitious than others? Does a writer’s need to attribute meaning to events or objects when creating a story make us more susceptible to magical beliefs? Do you have apotropaic devices in your home or perhaps you are even wearing one? Would these objects be a good way of describing a character who owned them? Or even the catalyst for a short story like the shoe I saw in Ledbury. I’d love to hear your thoughts.

With thanks to Alyson Hillbourne who reawakened my interest in hidden shoes by sending me this article.

Angela writes using pseudonym, Susan Carey. She has dual nationality, GB/NL and lives in Amsterdam. Susan has had short fiction published on multiple platforms and was a runner-up in the 2018 and 2017 Casket of Fictional Delights Flash Competitions. Her writing has also been published and performed by amongst others: Mslexia, Liars’ League, Reflex Fiction, the Casket and of course the wonderful Writers Abroad. She has a love hate relationship with her adopted hometown and often dreams of living in a thatched cottage, far from the madding crowd. In 2020 she published her short story collection, Healer. Tweets at @su_carey
View all posts by susancarey →
This entry was posted in Creative writing and tagged Apotropaia, foreign encounters, Hidden Shoes Index, History Pin, Northampton Museum, superstition, talismans, The Idalo Man, writers abroad anthology, writing research. Bookmark the permalink.