Sing for your supper, or is it dinner, or perhaps even tea?

A Dutch student learning English once asked me when British people have their supper. A deceptively-simple sounding question, isn’t it? One which I could have answered simply enough by telling him that supper is a simple snack of a sandwich or biscuits with a hot drink before going to bed. But then, if I did that I would have missed out on the chance to explain (or at least attempt to) the rather complicated English class system. It’s always easiest to start with oneself as an example so here goes.

Soap for Tea
Growing up as a smallholder’s daughter in 1970s Britain I believed myself to be working class with middle-class aspirations. We mixed with people from all levels of society through our love of horses and that included upper and middle-classes whom we got to know through show-jumping and Pony Club membership. At home breakfast was cereal or toast (from the Rayburn) with a few rashers of bacon, dinner was a substantial hot meal served about 1pm, tea was a cold meal, bread & cheese and cold meats followed by cake at 6.30pm. This meal always coincided with watching the Brummy soap series, Crossroads on telly, and then if still feeling peckish around bedtime, a cup of tea or Ovaltine accompanied by crackers or biscuits was in order for supper. Having hobnobbed a bit in the tuck shop at Pony Club Camp with posh people’s children I learned that they had supper around our teatime and that it was a hearty warm meal with two courses eaten in an informal manner. 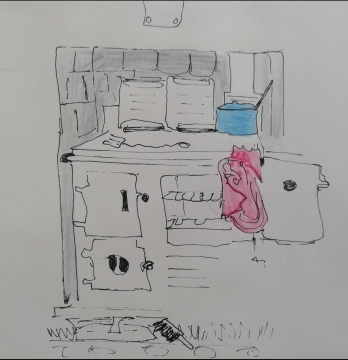 The Rayburn with toasting fork

After tea, washing up – All sketches by yours truly anno 1979

Class Divisions
When I went to university I was suddenly surrounded by middle-class people who had their main hot meal or dinner in the evening, a light lunch around noon, tea was something sweet eaten between lunch and dinner and supper a pre-bedtime snack. Are you getting confused? Believe me, I was. After finishing university and learning about garlic, avocado and Liebfraumilch wine, I travelled overland in Africa with a group of northerners and unsure of my provenance they quizzed me about what time of day I had dinner. Even though I had adopted some middle-class habits and nomenclature during my student days, dinner was still firmly embedded in my consciousness as a warm midday meal. Happy I had given them the right answer, I was warmly taken into the fold! Northerners consider themselves generally working class; the hard-working webbed feet of the elegant swan that is England anywhere south of Nottingham.

Source of Comedy
You’ll be relieved to hear I didn’t go on at length to my student as I have done here but I simplified my answer somewhat. But even so, being Dutch and wanting a straightforward answer to a straightforward question it probably sounded waffly. In the Netherlands you have ontbijt, lunch en avondmaaltijd and that’s it.

Is it perhaps time to ditch this outmoded way of pigeon-holing people into working, middle or upper class? But then where would we look for rich sources of comedy? So many of our best loved sitcoms were based on class idiosyncrasies. Only Fools and Horses, The Good Life, Are you Being Served, To the Manor Born, Dad’s Army, Keeping up Appearances and Hi-de-Hi are all built upon observations of the different layers of English society exaggerating each group’s aspirations and absurdities. Maybe that’s why there are so few good comedies being written today as society merges into one homogeneous whole in which everyone is vaguely middle-class. I’m curious to hear what time of day you have supper? What class do you belong to or perhaps you consider yourself classless?

Further ramblings on supper on The Guardian.

Angela writes using pseudonym, Susan Carey. She has dual nationality, GB/NL and lives in Nijmegen. Susan has had short fiction published on multiple platforms and was a runner-up in the 2018 and 2017 Casket of Fictional Delights Flash Competitions. Her writing has also been published and performed by amongst others: Mslexia, Liars’ League, Reflex Fiction, the Casket and of course the wonderful Writers Abroad. In 2020 she published her short story collection, Healer. Tweets at @su_carey
View all posts by susancarey →
This entry was posted in Art, Creative writing, Uncategorized and tagged dinner, England, English class system, English tea time, English traditions, Food, mealtimes, Supper, Teaching English. Bookmark the permalink.

4 Responses to Sing for your supper, or is it dinner, or perhaps even tea?