Living the Dream Inside a Chocolate Box

Those of you who follow my blog will know that Frank and I enjoy house-sitting and caring for animals. Looking after pets is a big part of the reciprocal agreement between house-sitter and owner. Often feeding the garden birds is something we are asked to keep up during the house-sit. We were once even asked to feed Aldi bread to a seagull called Sidney and his missus Samantha. So far we have looked after; horses, cats, dogs, fish, ducks, chickens and geese.

Dry Your Eyes
Now, my intention was to write a blog about how not to get too attached to the pets while looking after them. But I have failed miserably as I got very attached to one of ‘our’ wards – his name is Harvey – a miniature, long-haired Dachshund. He has the most soulful brown eyes and very soft, long fur which makes him an ideal lap dog, filling that gap for a pet owner who wants the fun and affection of a dog but the sofa-sharing convenience of a cat. Anyway, I have dried my tears which I shed on saying goodbye because the home-owner is keen for us to come back to house-sit next year’s holiday and I have even put my name on the list for a pup should they ever breed from him.

Bumper Harvest
This year has been a bumper harvest for house-sitting wonderful properties, meeting new animals and people! Neither of us were really familiar with the counties of Wiltshire and Hampshire but the rolling wheat fields in the slanting sun of the evening are breathtakingly beautiful. Avebury with its mysterious standing stones and quaint pub (encircled by the stones) was also a highlight. Does anyone remember the 1970s kid’s TV series, Children of the Stones? It was filmed in Avebury and scared the bejesus out of me.

Hampshire is also filled with pretty chocolate-box worthy villages and is only a stone’s throw from London where I visited the Frida Kahlo exhibition at the V&A. (Great exhibition but the V&A has really dumbed down, read my Tripadvisor review here – I even got food poisoning from their restaurant food.)
On a more positive note, Highclere Castle where Downton Abbey is filmed, is also just up the road in Berkshire. We spent a very enjoyable sun-drenched afternoon there, eating our own packed lunch, much cheaper and probably healthier!

Hobnobbing with the Locals
We were absorbed into the community on our house-sit in Worcestershire, making friends with the neighbours and being invited over for oven-baked pizza, Prosecco and a game of croquet on the lawn. The summer of 2018 will go down in history as a hot, dry one. Frank easily spent a couple of hours a day tending and watering (I chipped in occasionally) the extensive garden so it wouldn’t look like the Gobi Desert on the green-fingered owners’ return. Our dear friends, Cathy and David came to stay and David took some stunning photos of the garden and chickens. The village of Rock, near Kidderminster certainly tops our list for friendly and welcoming communities.

A Film Star’s Home
Below, a few pics of the highlights of our fabulous nine-week sojourn in the UK. We had originally planned to stay for a shorter period (seven weeks) but due to a cancellation by another house-sitter we had the chance to look after two dogs and two cats in the stunning village of Monxton in Hampshire. The 300-year-old thatched farmhouse formerly owned by film star, Gordon Harker (1885- 1967), is like something out of a fairytale. See more pics and Harker’s Bar on the Airbnb listing. Harker starred in three silent Hitchcock films and had an acting career which spanned the 1900s through the 1950s. Evidently he liked a drink as he built a bar in the cellar to entertain his film star friends. Maybe even Hitchcock had a tipple in the eponymous Harker’s Bar! We have yet to try it out as it’s decidedly spooky down there… 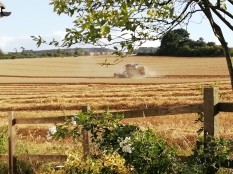 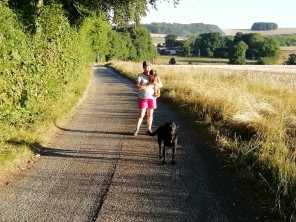 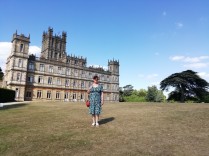 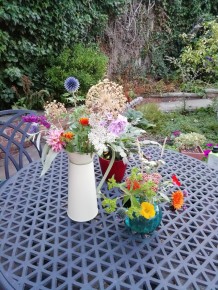 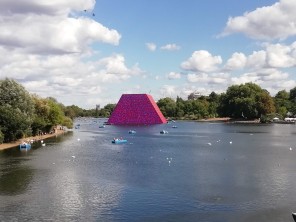 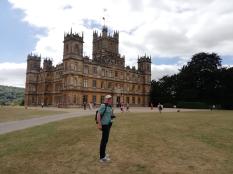 Angela writes using pseudonym, Susan Carey. She has dual nationality, GB/NL and lives in Nijmegen. Susan has had short fiction published on multiple platforms and was a runner-up in the 2018 and 2017 Casket of Fictional Delights Flash Competitions. Her writing has also been published and performed by amongst others: Mslexia, Liars’ League, Reflex Fiction, the Casket and of course the wonderful Writers Abroad. In 2020 she published her short story collection, Healer. Tweets at @su_carey
View all posts by susancarey →
This entry was posted in travel, Uncategorized and tagged Dachshund, Gordon Harker, Hampshire, Herefordshire, Highclere Castle, house-sitting, Labrador, Monxton, pet-sitting, Travel in UK, V&A, Wiltshire, Worcestershire. Bookmark the permalink.

2 Responses to Living the Dream Inside a Chocolate Box