Are you a Dressage or Rodeo Rider? – Training the Unconscious

Why do some stories, poems, paintings or performances move us when others don’t? Where does a unique artistic voice come from? I believe it begins with a strong connection to the unconscious. The unconscious can be a dark and frightening place; home to fear, anxiety and aspects of ourselves we don’t like or try to suppress. But you also find love, yearning and creativity there. Which brings us rather unexpectedly to dressage. 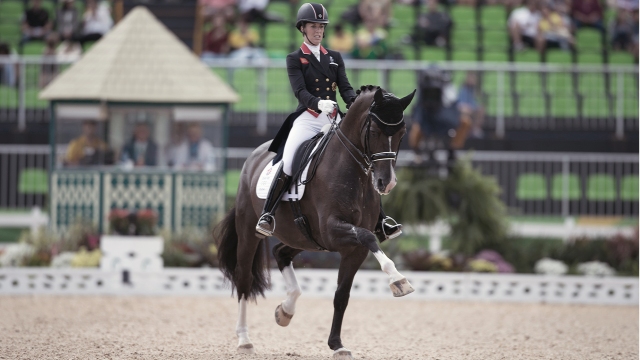 Think of the conscious mind as a dressage rider, rational, connected, concerned with the everyday; the conscious mind gets you to work and pays your taxes. The unconscious mind is the horse; big, unruly and wild, the place of dreams and desires. When the two work together in harmony the results can be spine-tingling.

What happens when we are in the zone?
Neuroscientist, Lewis Hou conducted tests using an MRI scanner on jazz musicians. He compared his differing results when the musicians were playing music from composed pieces, and when they improvised. During the improvised sections, the dorsolateral, prefontal cortex (situated near the temple) was temporarily disabled. This part of the brain is responsible for many cognitive tasks such as planning but also social inhibition. It develops very slowly during adolescence, which is why adults don’t throw screaming tantrums in the cereal aisle in Tesco’s. It’s only in later life when we introduce the rational, critical faculty that we start to distance ourselves from that free-thinking, uninhibited child. While we can happily kiss goodbye to the tantrums, we need to hang onto that creative, uninhibited urge which drives children to paint, draw and write without fear of failure.

Cutting off Teddy Bear’s head
When I was an art student at Goldsmiths University, in my late teens and early twenties, it was easy for me to access my unconscious. I was in a safe, structured environment in which eccentricity and creativity were actively encouraged. When I bought a giant teddy bear, cut off its and head and stuck a piece of mirror shard in its neck, I realised I had a lot of suppressed emotion (bucking bronco unconscious) to deal with. But this emotion was a HUGE source of creativity, resulting in 12 months of output and my final degree show (pictured above). Furred, anthropomorphic furniture displayed in a pastel mint-coloured room allowed visitors to step inside my subconscious world. Beyond the anger, I discovered joy and energy, family and friends left my show feeling uplifted and inspired. This early training in accessing the unconscious has stood me in good stead for all later creative projects. I have rarely suffered from writer’s block. I have had periods of not wanting to write, when there was too much upheaval in my life, but that’s a different story.

Keep the channel open
The characters in Robert Louis Stevenson’s Dr Jekyll and Mr Hyde came to the author in a dream. Mr Hyde is the living embodiment of unconscious impulses which the decent Dr Jekyll could not possibly express. Kubla Khan, Jane Eyre, The Shining, The Twilight Series, Stuart Little and Frankenstein were all dream-inspired. Published stream of consciousness writing such as Joyce’s Ulysses or McBride’s, A Girl is a half-formed Thing, are not the only way to write from the unconscious. I believe there are other ways to ‘harness’ the unconscious during writing. Usually a good writing day for me, starts with recording my dreams. My dreams, like most people’s, are often nonsensical, so I rarely use the subject matter but recording them opens the channel between conscious and unconscious minds.

So are you on friendly terms with your unconscious and does it help you develop characters and plots? Or is it an unwieldy bucking bronco, best avoided in case it throws you off? Perhaps you have some tips to share for getting into the zone. Writing during the month of November for Nanowrimo/switching off your internet connection/retreating to the garden shed? I’d love to hear your ideas.

With thanks to author, Meg Rosoff – Artsnight Review

Angela writes using pseudonym, Susan Carey. She has dual nationality, GB/NL and lives in Nijmegen. Susan has had short fiction published on multiple platforms and was a runner-up in the 2018 and 2017 Casket of Fictional Delights Flash Competitions. Her writing has also been published and performed by amongst others: Mslexia, Liars’ League, Reflex Fiction, the Casket and of course the wonderful Writers Abroad. In 2020 she published her short story collection, Healer. Tweets at @su_carey
View all posts by susancarey →
This entry was posted in Uncategorized and tagged artsnight review, charlotte dujardin, creative process, Creative writing, Creativity, Goldsmiths University, meg rosoff, Nanowrimo, Olympics, rio 2016, the subconscious, the unconscious, valegro, Writing. Bookmark the permalink.

6 Responses to Are you a Dressage or Rodeo Rider? – Training the Unconscious